Water body types are groupings of water resources that are physically and biologically similar. Identifying water body types is an important initial step in the planning phase because they define the resources for which you will be setting management goals and developing numerical nutrient criteria (NNC). In a statistical sense, your goal is to identify water body types that reduce the variability of key characteristics within the group (i.e., make the group members as similar as possible); and maximize the variability between groups (i.e., make the groups as different as possible).

The primary grouping of water body types is lakes and reservoirs, streams and rivers, and estuaries and coastal waters, and it provides a starting point for your selection process.
Because of the large variation of factors within these groups, further refinement is needed. You might include these second-level subgroupings of water body types:
Because significant physical and biological variations exist even within these subgroupings, some states use size to create a third-level grouping for some or all of the water bodies. For example, a state might group its reservoirs into three categories: large (more than 500 acres), medium (between 100 and 500 acres), and small (less than 100 acres). Grouping by size not only reduces physical and biological variability within a water body type, but also allows states to:

Examples of third-level groupings of water body types based on size might include:

All water body types are part of the hydrologic cycle, a conceptual framework that describes the endless circulation of water from ocean to atmosphere to earth and then back to ocean. Consider these two important aspects of the water cycle when selecting your water body types: 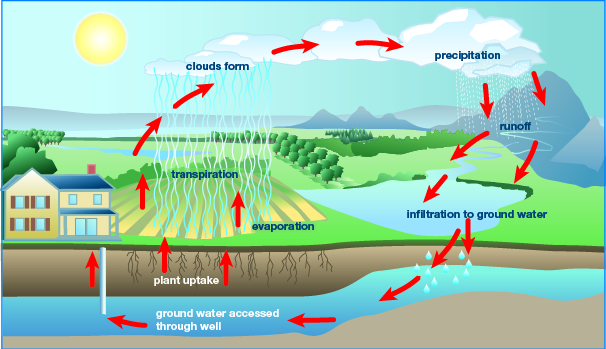 Form—Natural lakes occur in several forms, generally depending on the region in which they are located as well as the overall topography and underlying geologic structure of the watershed. They include:

Hydrology—Natural lakes are characterized by relatively long hydraulic residence times and tend to be centrally located within their watershed. Water usually enters lakes via small streams, wetlands, and ground water discharge and usually exits lakes via small streams. Size—EPA generally considers a lake to have a surface area of at least 10 acres; any smaller water body would be defined as a pond. Of the approximately 30,000 natural lakes in the United States, most (42.5 percent) are 25–125 acres. Smaller lakes (10–25 acres) comprise 34 percent of the total, and only about 14 percent of U.S. lakes exceed 250 acres. Selecting Water Body Types—The size, depth, and shape of the lake basin has a major impact on the productivity of the lake. Small shallow lakes are generally more productive than large deep lakes. For this reason, grouping natural lakes by size makes sense. Transition Zones—Since lakes generally occupy a central location in their watershed, there is usually no significant transition zones to another water body type.

Form—Reservoirs are formed by the impoundment of rivers and constructed for specific purposes such as flood control, water supply, hydropower, and navigation. Tributary storage reservoirs are located on lower order rivers. They:

Hydrology—All reservoirs have three zones, but location and structure differ depending on if they are tributary storage, main stem storage, or run-of-the-river reservoirs.

Size— Of the approximately 20,200 reservoirs in the United States, most (53 percent) are small, 10–25 acres. About 33 percent are 25–125 acres, and only about 4 percent of reservoirs exceed 1,250 acres. Selecting Water Body Types—Selecting water body types within the overall category of reservoirs is a challenge. You might be tempted to define types based on size, similar to lakes; and indeed reservoirs share many physical and biological similarities with natural lakes. There are important attributes that make reservoirs very distinct from lakes, however, including the fact that reservoir watersheds are much larger than watersheds of natural lakes, resulting in a much higher areal water load. This makes residence time a factor worth considering as well as the type and purpose of the reservoir: tributary storage, main stem storage, or run-of-the-river. Transition Zones—The lacustrine zone of the reservoir is the most lake-like. The other two zones can both be considered transition zones. The threshold that separates a river from a reservoir would be the upstream boundary of the lacustrine zone. One parameter that can help you identify a lacustrine zone is stratification—it is usually pronounced in the lacustrine zone, while the other zones are mixed and/or weakly stratified.

Form—The overall longitudinal profile of most streams can be divided into three zones:

Hydrology—Precipitation is a key factor and the distinct east-west divide of the United States results in plentiful rainfall in the east and sparse rainfall in the west, which, along with topography, shapes streamflow characteristics. Size—Stream ordering refers to a method of classifying the hierarchy of natural channels within a watershed. The uppermost channels (headwaters) are designated as first-order streams down to their first confluence. A second-order stream is formed by the confluence of two first-order streams and so on. Large rivers have the highest number, with the Ohio River being an eighth-order stream and the Mississippi being a 10th-order stream. About 90 percent of perennial stream and river miles in the United States are in the first- to fifth-order range. Selecting Water Body Types—Physical and biological characteristics are closely tied to stream order. For practical as well as ecological reasons, streams in the first- to fifth-order range are known as wadeable streams and often considered their own water body type. Higher order streams are known as nonwadeable streams or rivers and form another water body type. A third water body type—delta rivers—are associated with the depositional zone of the stream’s longitudinal profile. Transition Zones—Transition zones occur throughout the longitudinal profile of a stream. The transition between wadeable and nonwadeable streams is straightforward when tied to the stream ordering system, the fifth-order stream being the threshold. The transition between a river and a delta river as well as between a delta river and the ocean are less clear. Delta rivers typically have three parts:

The thresholds for defining the three parts usually are left to professional judgement.

Form—Estuaries have many forms, including the following:

Hydrology—Hydrodynamic patterns vary greatly and are used for classification purposes. Stratification, mixing, and circulation—vary within estuary types, from highly stratified to well-mixed. Residence time—influences a wide range of biological responses to nutrient loading. Water exchange processes—river flow, tides, and waves greatly affect mixing. Tidal amplitude—higher tidal energy impact nutrient cycling and availability for primary production. Selecting Water Body Types—Selecting estuarine water body types is a challenge. Form, hydrology, and other factors such as salinity gradients have been used as the basis for determining types. Because estuaries often are so unique, however, development of site-specific NNC is not uncommon. Many estuaries and coastal waters share multiple political boundaries and, for the sake of consistency, all involved jurisdictions should jointly decide on the selection of water body types. Transition Zones—The standard definition of an estuary generally includes the facts that it is a semienclosed coastal body of water, has a free connection with the open sea, and the sea water it contains is measurably diluted with fresh water derived from land drainage. Estuaries, therefore, function as a transition zone between freshwater draining the land and the open ocean and are sometimes defined by salinity levels. The ocean-side boundary is where salinity is the same as the open ocean, and the river-side boundary defined is the point at which salinity begins to increase from background levels found in the freshwater inflow. In the lower Hudson River, for example, this threshold is called the salt front—where the concentration of chlorides reaches 100 milligrams per liter. The location of boundaries using this definition, of course, is very fluid and changes according to tides, freshwater inflows, winds, rainfall, seasons, and other factors. For this reason, physical landmarks are sometimes the default choice for defining an estuary’s boundaries.

Form—Geomorphology of the continental shelf varies along the U.S. coast. The Atlantic coast has wide and shallow shelves while the Pacific coast has narrower shelves. There also is variation in terms of slope, which influences bottom sediment stability and upwelling which, in turn, controls the flow of energy and nutrients available for primary production. Hydrology—Shelf geomorphology also influences hydrodynamic patterns along with ocean-scale patterns of climate. Vertical salinity differences tend to decrease toward the open ocean boundary. The kind of current that dominates the shelf also is a potential classifier and includes storm currents, tidal currents, and intruding ocean currents. Selecting Water Body Types—As with estuaries, selecting coastal water body types is a challenge because of their diverse nature. In addition to shelf geomorphology, habitat and community characteristics might be considered as types, including the presence of mangrove, seagrass, macroalgae, and/or and coral communities. Transition Zones—The transition from estuarine and oceanic water occur on the continental shelf, the boundary being where salinity is the same as the open ocean. The outer boundary of coastal waters is usually defined as the shelf break, or approximately 20 nautical miles offshore when the continental shelf is extended. If there is no estuary, the inner boundary of coastal water is usually defined as the mean high water mark of the coastal baseline.